NeuCode affords a different approach to protein quantification by exploiting the subtle mass differences of neutron binding in C, N, and H. At NCQBCS, we are developing the method to deliver up to 9-plex capacity. This technology is particularly exciting as it can offer multiplexed metabolic labeling, the gold standard method, for cell culture and in vivo labeling of mammals.

When appropriate, please acknowledge our support in publications and presentations: “This work was supported in part by the National Institutes of Health grant P41GM108538.”

Consider a lysine molecule that has two additional neutrons – i.e., +2 Da. There are six ways one could build this molecule, e.g., 2 15N or 2 2H, and so on. Because of differences in neutron binding energy, each of these isotopologues has a distinct mass, with the two aforementioned examples differing by 18.5 mDa. Inclusion of four, eight, or 12 additional neutrons into the lysine molecules allows one to generate nearly a hundred unique isotopologues, all spaced about 1 mDa apart. 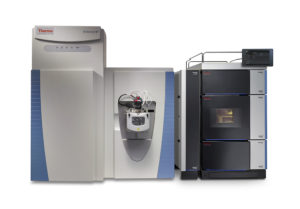 High resolution mass analyzers, i.e., Fourier Transform instruments, especially the Orbitrap, have become widespread and offer the resolving power necessary to distinguish NeuCode lysine isotopologues embedded in identical peptides. Our initial description of NeuCode SILAC utilized two +8 Da heavy lysine amino acids, one with six 13C atoms and two 15N atoms and the other with eight 2H.[1] These two isotopologues differ in mass by 36 mDa and our experiments demonstrated that m/z peaks separated by this mass difference are easily distinguished at resolving powers above ~ 100,000 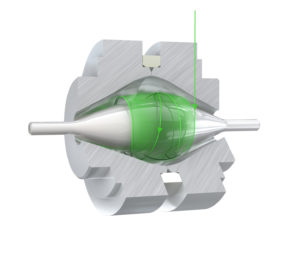 When using NeuCode a low resolution MS1 scan is first acquired and used to select precursors for data-dependent MS/MS analysis. Next, a high resolution MS1 scan is acquired, in this case using an Orbitrap analyzer, permitting detection of the two NeuCode peaks and, thus, allowing quantification. While this scan is being acquired tandem mass spectra are taken using the ion trap analyzer on the Orbitrap ion trap hybrid system. Note that spectral complexity of the low resolution (R = 30,000) MS1 and the MS/MS scan are not impacted by the presence of the labels; in fact, you cannot even tell the labels exist unless they are revealed by high resolution analysis. 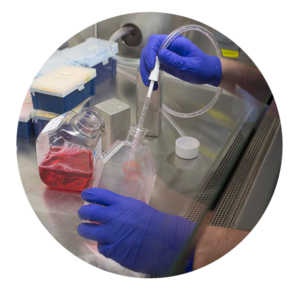 NeuCode is an ideal approach to perform multiplexed metabolic labeling for cultured cells. Currently up to seven plex labels are commercially available.  And, as instrument resolving powers continue to improve, NeuCode plexing capacity will likewise increase. Finally, the approach is ideal for primary cell lines where incomplete labeling is anticipated.

NeuCode metabolic labeling can be extended to mammalian systems and offers a multiplexed method for adult mouse labeling and can be accomplished in as few as 10 days. This is the first method to permit such rapid in vivo labeling and eliminates the need to generate a labeled reference colony.

Want Hands on Training in this Technology?

Thermo Scientific™ NeuCode™ amino acids augment the level of multiplexing achievable for the metabolic labeling of proteins for mass spectrometry analysis. NeuCode™ Lysine may also be used with traditional SILAC to improve flexibility of multiplexing options or to reduce complexity of analysis.

Read more about other applications of NeuCode including its use for peptide and protein identification, top-down quantification, data-independent acquisition, and much more.

Read more about other applications of NeuCode including its use for peptide and protein identification,
top-down quantification, data-independent acquisition, and much more. 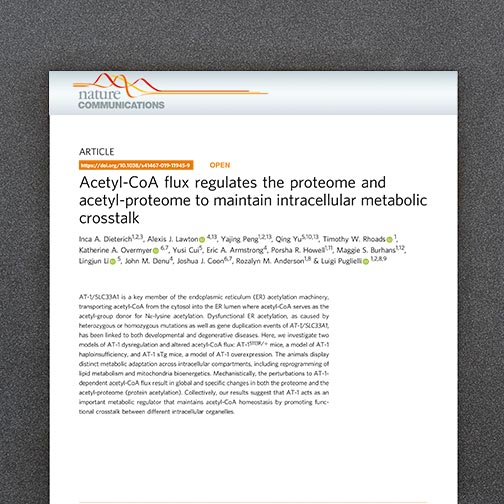 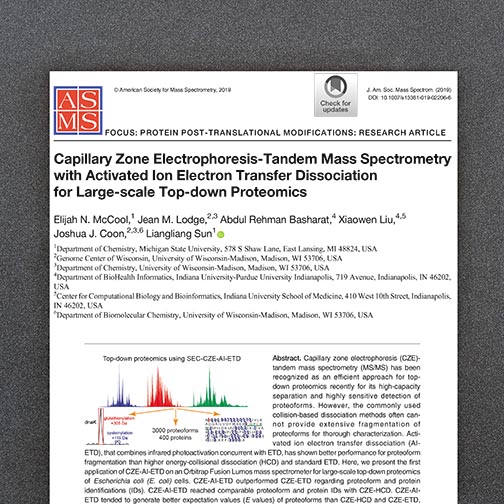 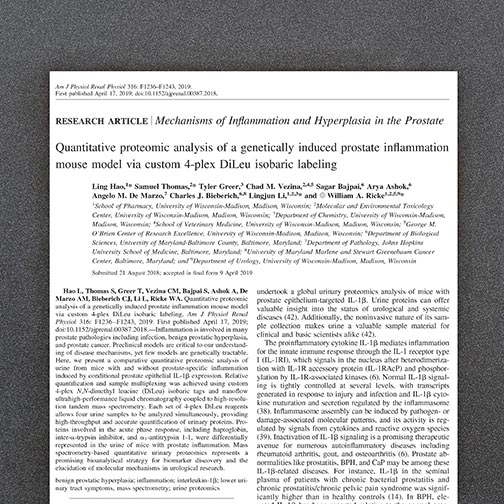 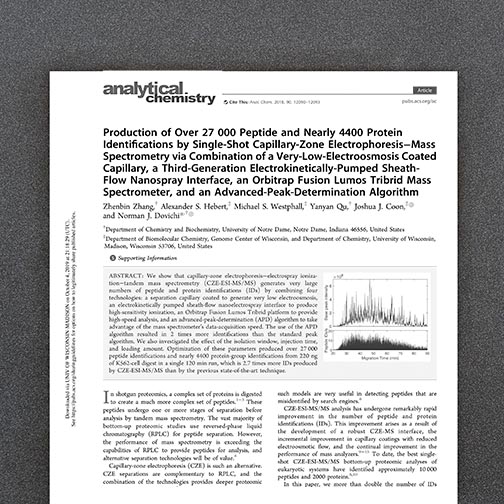 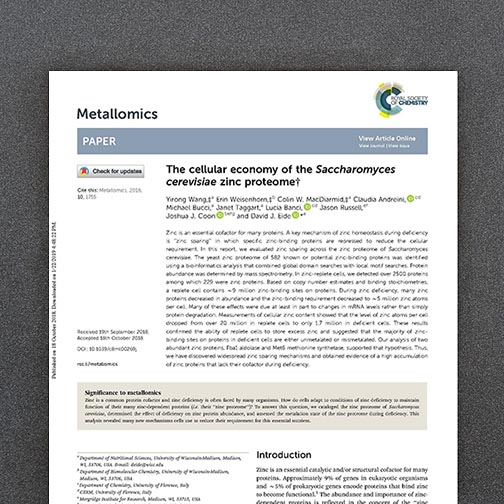 The cellular economy of the Saccharomyces cerevisiae zinc proteome 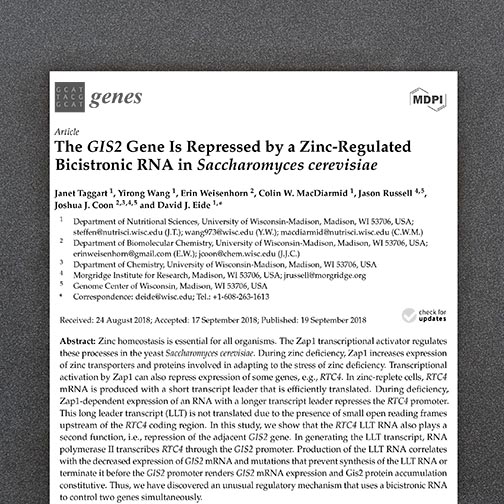 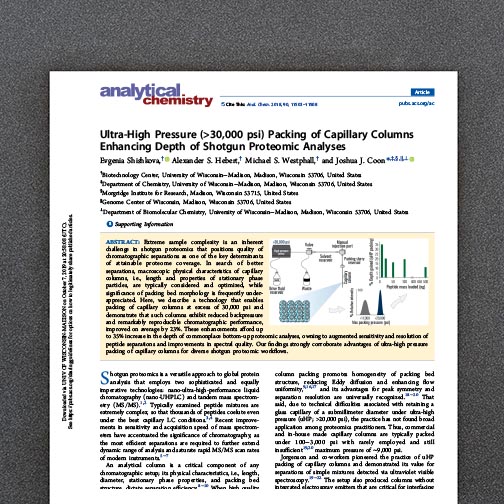 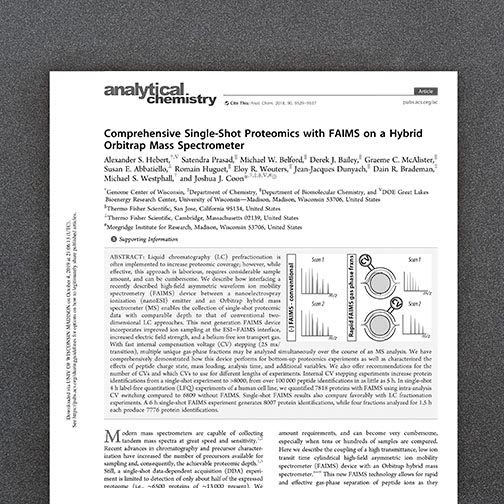 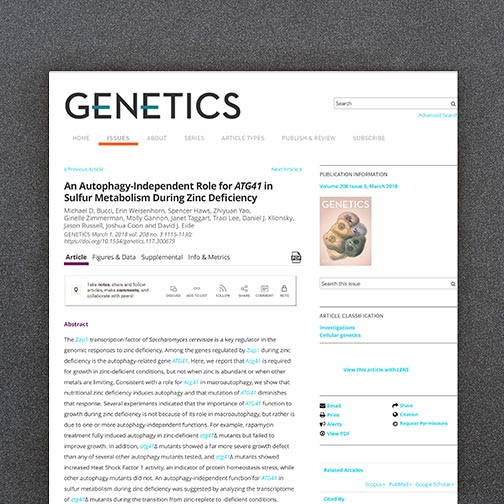 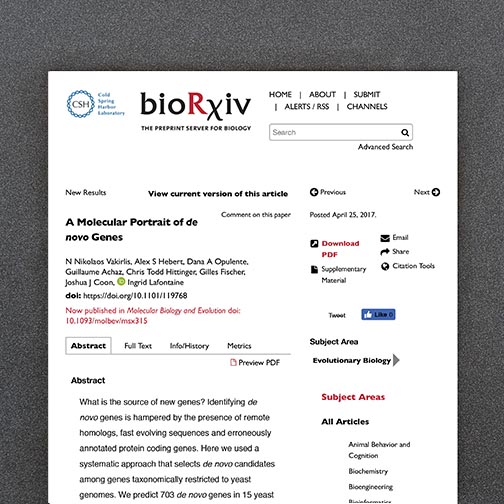 A molecular portrait of de novo genes in yeasts 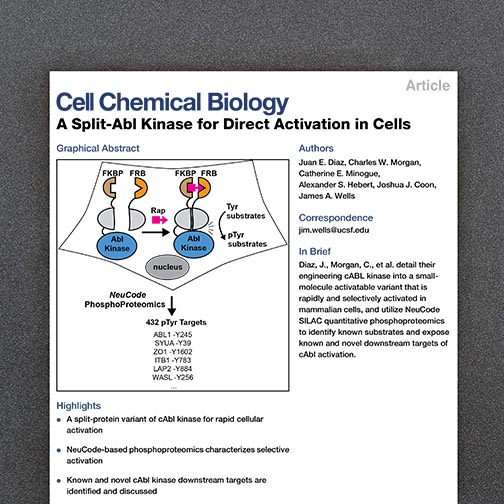 A split-Abl kinase for direct activation in cells 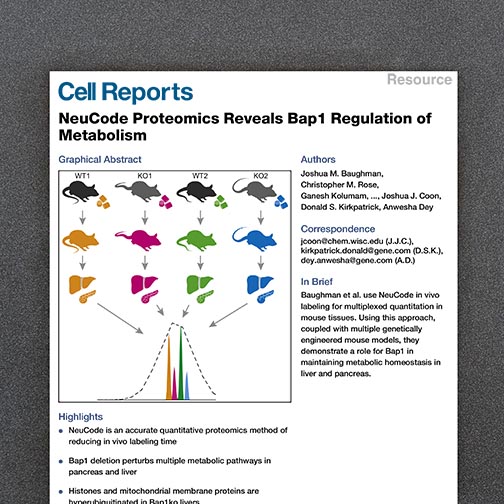 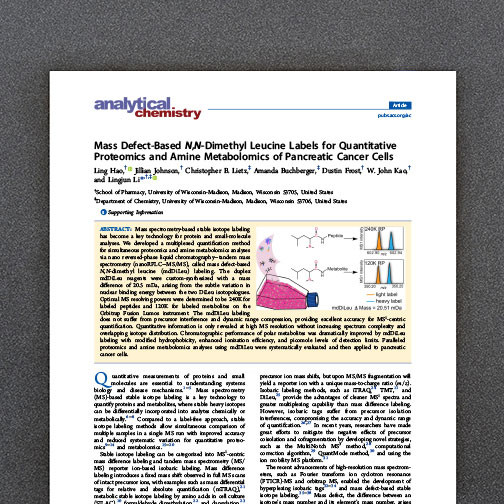 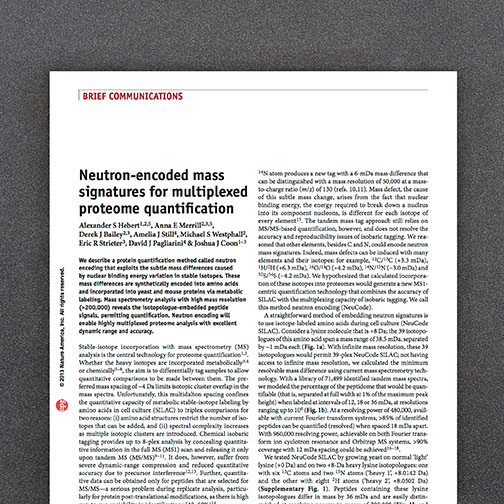 Our Initial Description of NeuCode 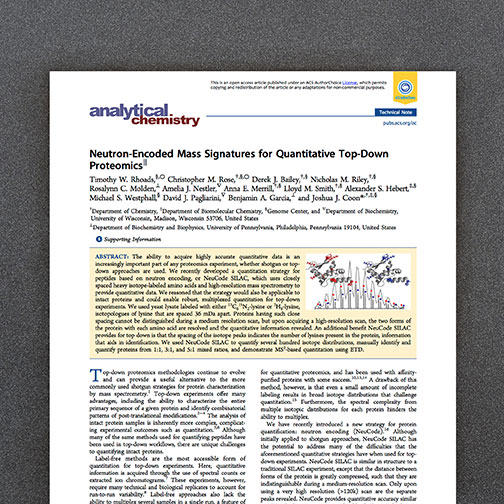 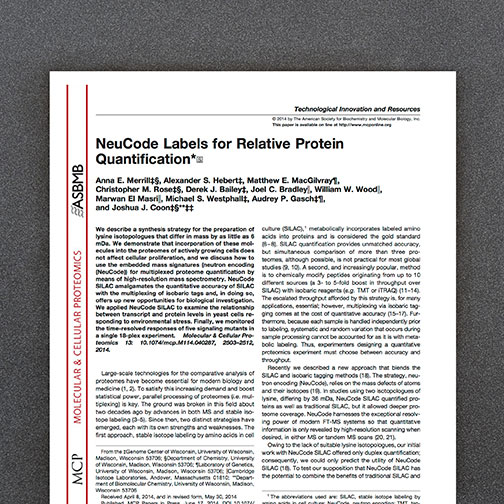 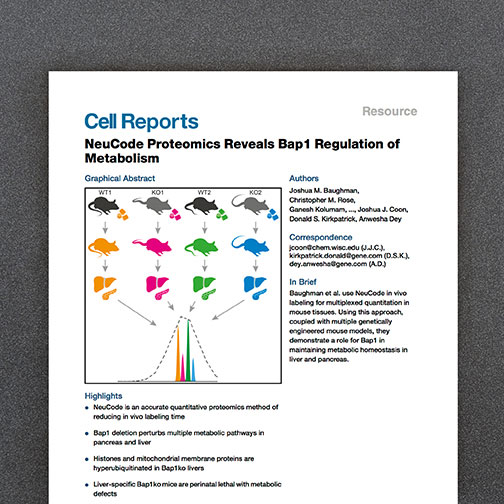 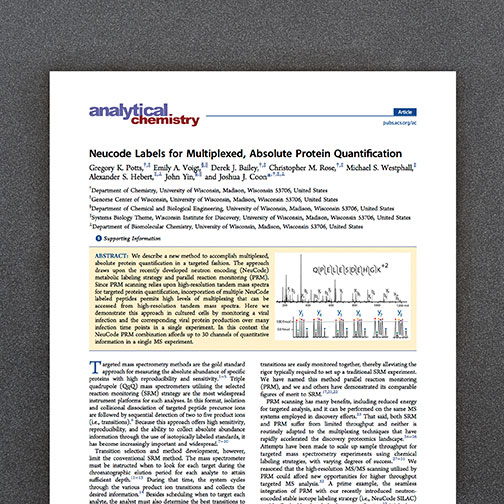 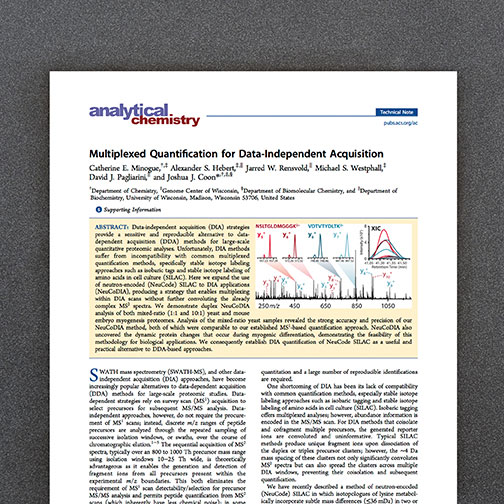 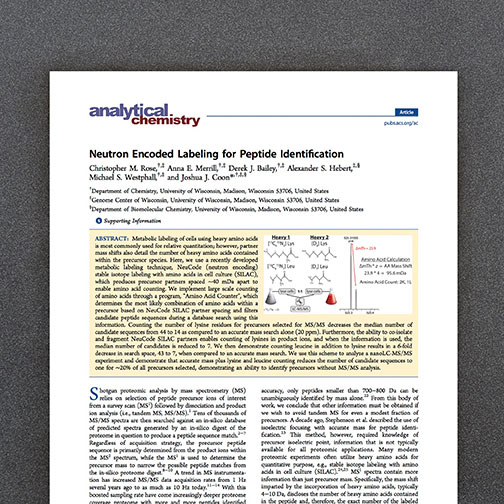 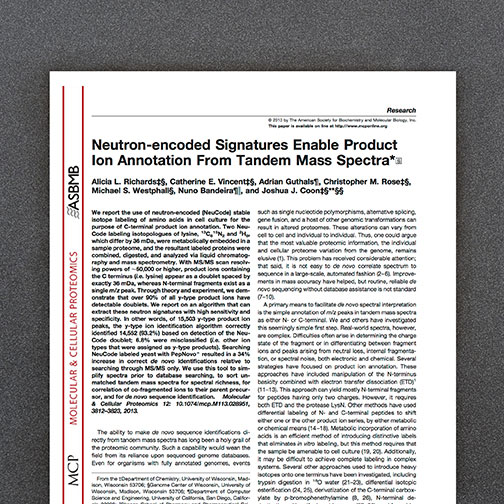 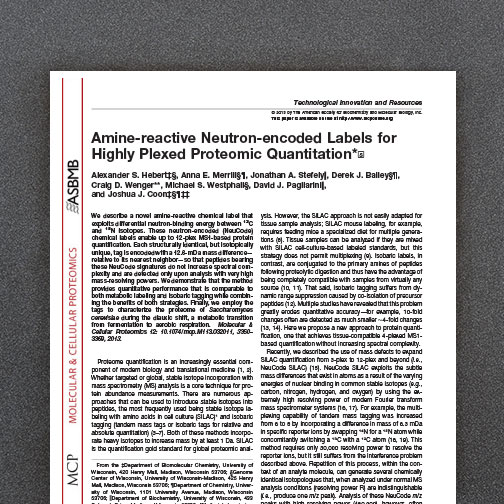 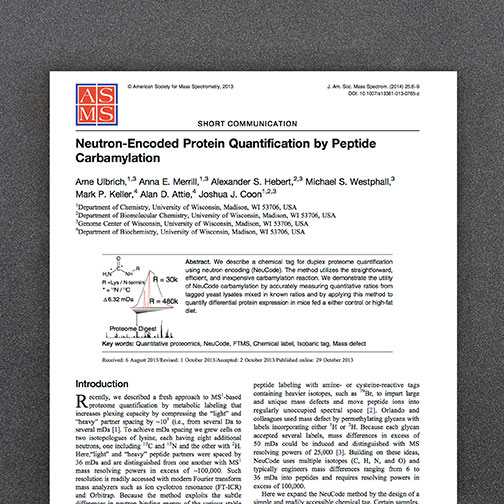 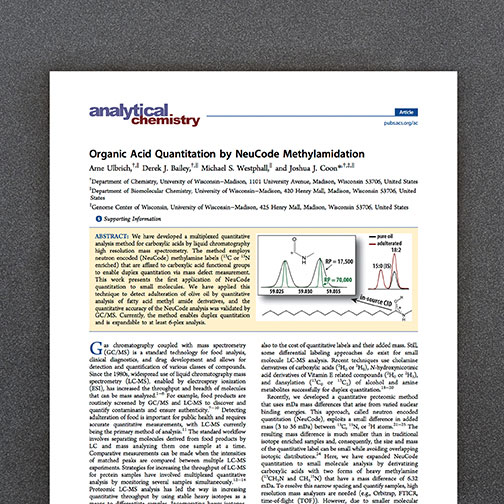 NeuCode is Available From Our Industrial Partners

For additional information about NCQBCS please send your contact details using the form below.
Note, if you are interested in training, please use the form on our training page.

For additional information about NCQBCS please send your contact details (name, institution, email) along with a short description of how we can help to laura[dot]vantoll[at]wisc[dot]edu.

Note, if you are interested in training, please use the form on our training page.